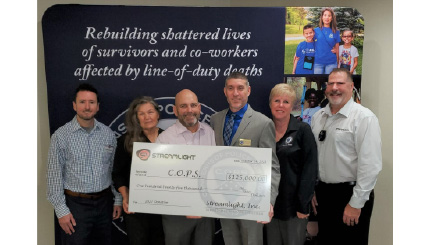 Eagleville, PA — October 25, 2021 — Streamlight®, Inc., a leading provider of high-performance lighting and weapon light/laser sighting devices for the law enforcement market, has renewed its sponsorship of Concerns of Police Survivors (C.O.P.S.) for the 22nd year in a row. The company’s support helps to underwrite ongoing programs and activities for survivors of fallen officers. Streamlight’s 2021 contribution as a C.O.P. S. Guardian Sponsor totaled $125,000, including proceeds from recent sales of its ‘blue’ C.O.P.S. logoed products.

Streamlight supports the C.O.P.S. organization by sponsoring multiple programs and events throughout the year, culminating in this year’s National Police Weekend activities in Washington, D.C. where the company was the Presenting Sponsor at the Blue Honor Gala.

"Streamlight is proud, as a Guardian Sponsor, to support the programs C.O.P.S. offers to the law enforcement community, including those who have lost loved ones in the line of duty," said Streamlight President and Chief Executive Officer Ray Sharrah. "As avid supporters of first responders, we are committed to making sure that the law enforcement community has the tools they need to keep themselves safe."

This year, Streamlight held its 7th Annual 5K/1 Mile Fun Walk for C.O.P.S. virtually, with participants completing a virtual run or walk at the location and time of their choice between August 14-28.

Today, more than 50 C.O.P.S. chapters nationwide provide resources to some 50,000 survivors, including immediate and extended families and co-workers of officers who have died in the line of duty.

For more information about C.O.P.S. and the programs that it offers, please visit concernsofpolicesurvivors.org.