Weapon-Mounted Lights & Handheld Lights: What to Use When Searching

Weapon-Mounted Lights & Handheld Lights: What to Use When Searching 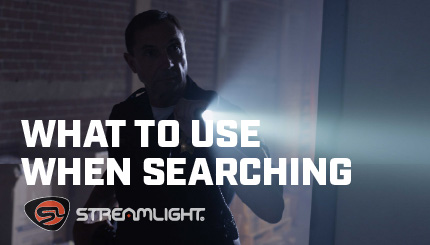 In 2002, when I went through the academy, the agency I worked for made a new policy that allowed police officers to carry a weapon-mounted light if they paid for it themselves. I decided to get one because I thought it would help me search buildings more efficiently when I started answering calls. I also carried the light on my mock gun during training so that I could get more practice with it. There were no policies against using it, but little training on best practices.

Fast forward to 2006. I was assigned as a sniper/entry team member in a multi-agency SWAT team on the west coast. We were conducting active shooter training in a large shopping mall. It was late at night, the mall was closed, and we had role players in different stores and hallways. As we approached a large intersection, several people jumped out from a dark area screaming for help. The startle made most of us jump. I activated the light on my simulation rifle to scan for weapons, and after seeing none, went back to a low ready position. At the time, there weren’t very many policies on pointing a weapon at bystanders while responding to an active shooter. It was the price of doing business in a high-pressure situation. That training, however, got me thinking about how we could use handheld and weapon-mounted lights together.

I started to learn more about low-light shooting and searching with lights. I found that many agencies across the country were beginning to teach multiple techniques to reduce liability when searching in low light. I never want to point my firearm at someone unless there is an immediate threat to my life or someone else’s. I adopted several techniques and items into my gear and practices to keep myself and others safe. Most of them became standard instruction at our academy. I continue these practices today while carrying a firearm for self-defense.

I always carry a handheld flashlight wherever I go. It’s my primary searching light, even if I am armed with a weapon-mounted light. I can take this light anywhere I go, even when unarmed. I carry it to sporting events, schools, and even on airplanes while traveling. Lights like Streamlight’s Stinger® 2020, ProTac®, and Strion® are high-output, but can be easily controlled with one hand.

One of the techniques I adopted while I was working as a law enforcement officer was to search with my handheld light and keep my pistol at a low ready. If a situation arises where I need to draw my pistol in low light, my handheld light always comes out as well. I can avoid unintentionally pointing my weapon at someone as I search. If the need arises to shoot, there are a variety of positions I can use efficiently and safely.

Some situations may, however, not allow for a handheld light. Officers carrying shields and K9 handlers typically have their non-shooting hand occupied. Luckily, newer and stronger weapon-mounted lights like Streamlight’s TLR-1 HL® or ProTac® Rail Mount HL-X allow for safe-searching techniques with a weapon-mounted light. Bouncing the light off the ceiling or the floor allows the firearm to be pointed in a safe direction while still adequately lighting up a room.

In the end, whichever method you decide on, I highly recommend carrying both types of lights. Train with them often so that if the time comes, you have the tools to protect yourself, your family, or the community that you serve.