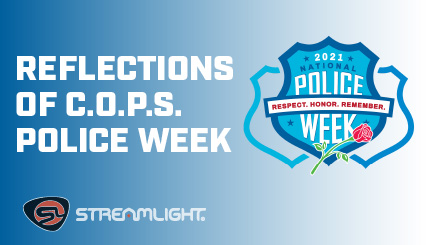 It's every police family's worst nightmare – their loved one not returning home from their shift. Not long ago, I was sitting as a guest at a Police Week event in Washington D.C. with members from C.O.P.S. (Concerns of Police Survivors). I was buried in emotion as I listened to several Survivors (loved ones of stricken officers), as they told their stories. They told us about the memories they keep, what happened leading up to that fateful day, and the knock on the door.

C.O.P.S. is an organization based in Missouri in a town called Camdenton, nestled within the Ozark Mountains. It may be a small town, but don’t let that fool you. The C.O.P.S. organization and its people have gigantic hearts and do a massive amount of good for every Survivor they can help. They provide support services for thousands of Survivors all over the United States.

C.O.P.S. also holds a special place in Streamlight’s heart. Streamlight is a long-trusted brand used every day by law enforcement around the world. You would have trouble finding a police agency that doesn't have at least a few Streamlight flashlights. Whether it's the light on a duty belt or attached to a service weapon, Streamlight flashlights are some of the most frequently used tools by officers. Streamlight has created blue C.O.P.S.-branded lights and donates a portion of the proceeds to C.O.P.S. every year, along with a sponsor donation of over $100,000.

Spending Police Week with the C.O.P.S. staff helped me realize that their organization operates like a family. I saw a glimpse of how integral they are to Survivors' lives. Thousands of Survivors from all over the United States came together at the C.O.P.S. event to honor their loved ones that died in the line of duty over the past year…over 410 officers. During the event, C.O.P.S provides counseling, classes, and support to the families of the fallen. They even hold special events for the kids. Many of them come back yearly to help, and some end up joining the organization. Former President of C.O.P.S, Emilio Miyares, was one of those kids. His father was killed by an assailant while on duty. Emilio attended C.O.P.S. youth activities year after year to help other kids like him.

Police Week is just one week for the C.O.P.S. organization. They have over 50 chapters nationwide with events happening throughout the year. I heard stories from Survivors about C.O.P.S representatives that would stay the night to support and stand beside them in their time of need. They also help Survivors with scholarships, special retreats, trial and parole support, and other assistance programs. In addition to Survivor support, C.O.P.S. offers training and assistance to law enforcement agencies on how to respond to the loss of a fellow officer.

If you are ever in the Ozark Hills of Missouri, be sure to stop by the C.O.P.S. headquarters and say hello to their staff. I can assure you they will treat you like family.