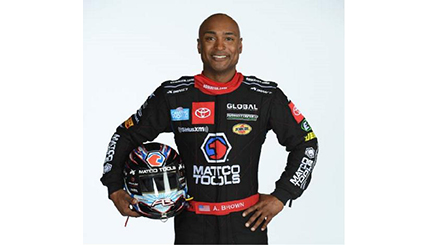 Antron Brown became the winningest Top Fuel driver in Atlanta Dragway history when he raced his dragster to his 5th victory in the Lucas Oil NHRA Southern Nationals in early May, 2021.

“Our sponsorship with Antron Brown is in huge part due to the fact that many of our automotive customers are drag racing fans,” said Streamlight Vice President, Sales and Marketing, Michael F. Dineen. “Antron and his team regularly use Streamlight products in maintaining their vehicles, and we are very proud to have him represent our brand.”

“We are very excited and proud to be partners with Streamlight,” said Brown. “When I think of Streamlight, I think of trust and reliability.  When I’m going 330 miles per hour, I definitely want them in my corner.”

Brown raced in the NHRA's Pro Stock Motorcycle division from 1998 to 2007, running his first three years with Vincent's Team 23 Racing. Brown won 16 events in the motorcycle division and had a best finish of 2nd in points in 2001 and 2006. In 2008 he switched to Top Fuel dragsters.