Streamlight® Renews C.O.P.S. Support For 20th Year In A Row

Streamlight® Renews C.O.P.S. Support For 20th Year In A Row 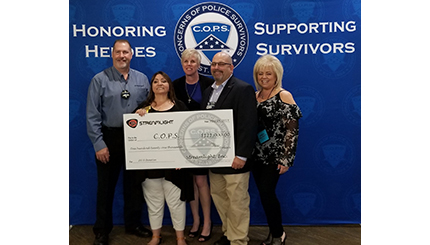 Eagleville, PA — June 17, 2019 — Streamlight®, Inc., a leading provider of high-performance lighting and weapon light/laser sighting devices for the law enforcement market, has renewed its sponsorship of Concerns of Police Survivors (C.O.P.S.) for the 20th year in a row. The company’s support helps to underwrite ongoing programs and activities for survivors of fallen officers. Streamlight’s contribution for 2019 totaled $121,000, including $8,700 in proceeds from recent sales of its Blue Nano Light® and Blue Siege® AA lantern.

Streamlight’s support helped to fund C.O.P.S. activities in Washington, D.C. leading up to National Police Week, May 15-21. As part of the annual C.O.P.S. observance, which honors fallen officers and their families, Streamlight once again served as a major sponsor of the organization’s annual survivor’s luncheon. The company also was a sponsor of the Blue Honor Gala, celebrating the 35th anniversary of C.O.P.S. and the 10th anniversary of Law Enforcement United, an organization which also commemorates fallen officers.

For more information about C.O.P.S. and the programs it offers, visit www.concernsofpolicesurvivors.org.